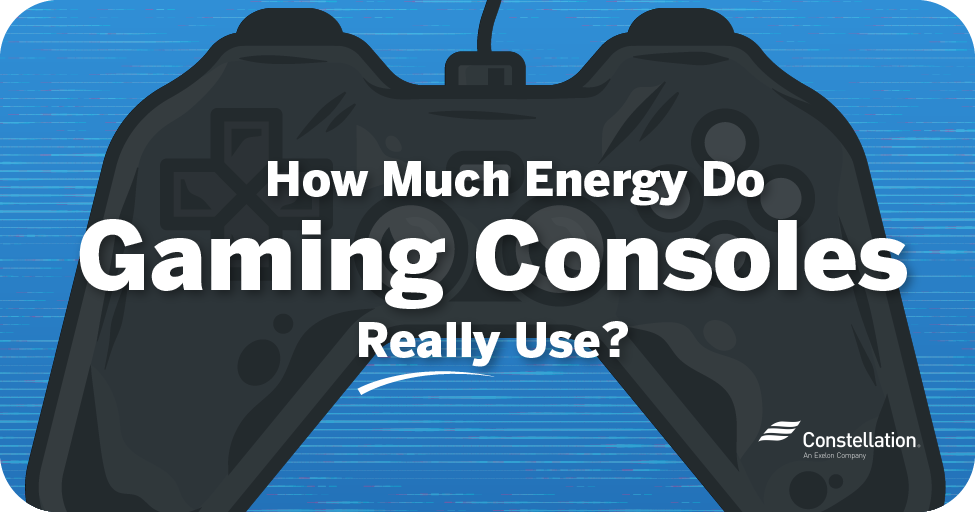 How Much Energy Do Game Consoles Really Use?

Computer games have never been more popular. Two-thirds of Americans use PCs, consoles and streaming devices to play games. One study found that gaming accounts for 5% of residential energy use in California — the same amount of energy that 10 million refrigerators might use.

Video games have changed dramatically since Atari began marketing a game called Pong back in the 1970s. In fact, today’s games use 50 times more electricity. Especially now, as Americans are spending more time at home and keeping an eye on the budget, it’s a good idea for gamers to consider how much energy they use and how they could play more efficiently.

Energy use of old-gen game consoles 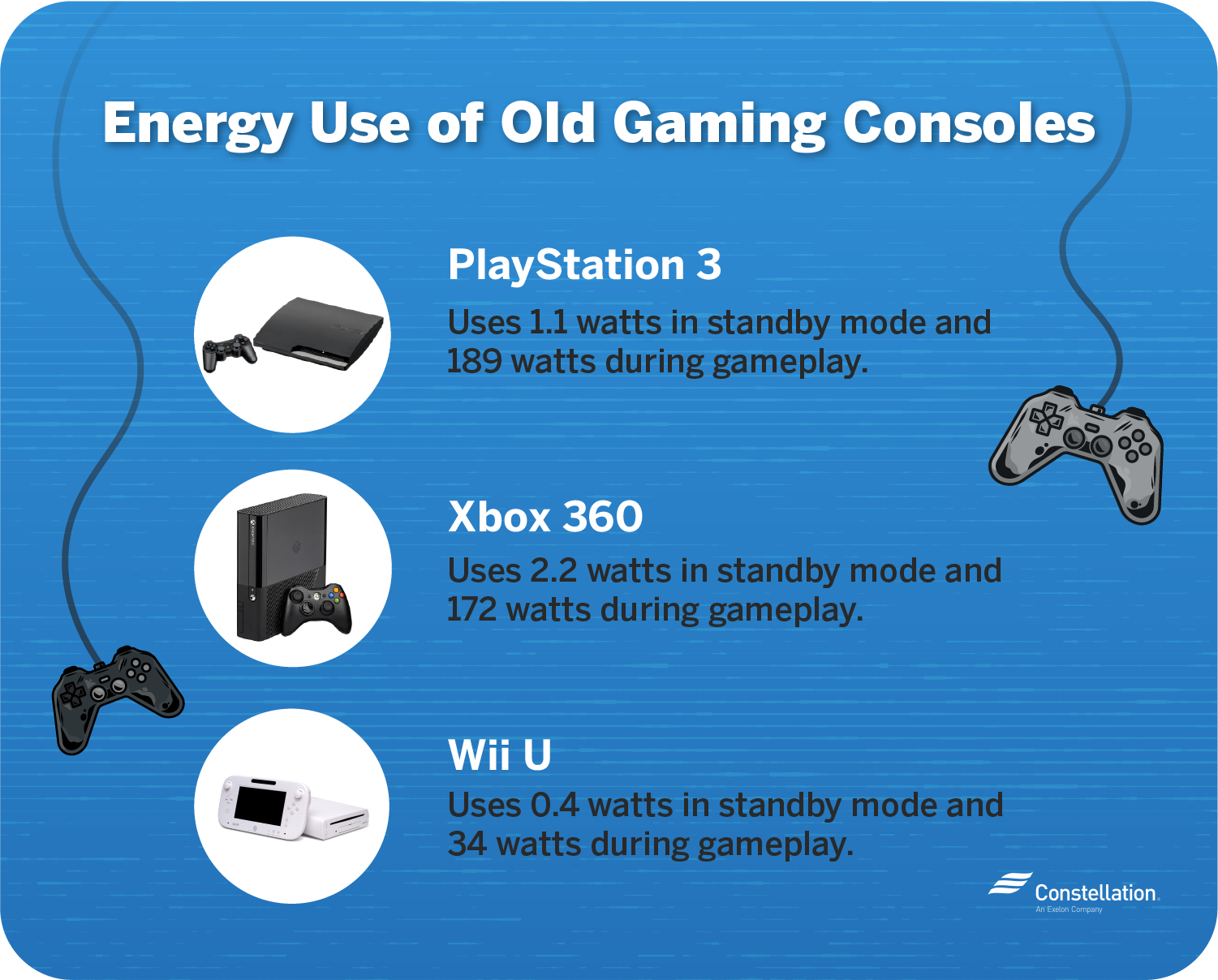 The PS3 uses dramatically more power than the previous generation, the PS2, according to a 2013 game console energy consumption study.

Energy use of a PS3 in standby mode

Energy use of a PS3 during gameplay

Energy use of a PS3 during gameplay is measured at 189 watts.

The Xbox 360 consumes an average of 70 kilowatt-hours per year.

Energy use of an Xbox 360 in standby mode

Energy consumption for the Xbox 360 in standby mode is 2.2 watts — double the PS3 standby power consumption.

Energy use of an Xbox 360 during gameplay

The Wii U is one of the more energy-efficient gaming consoles among similar devices. It uses less than half the power of Xbox One and PS4.

Energy use of a Wii U in standby mode

Energy use of a Wii U during gameplay

When the Wii U is in gameplay mode,  the console uses 34 watts.

Energy use of next-gen game consoles

The new generation of game consoles can have a major impact on energy consumption in your home. The problem is in the hidden cost of standby power use.

A Natural Resources Defense Council study found that game console energy consumption in standby mode accounted for an outsize percentage of the total energy consumed by these devices. People use the standby mode because it allows the console to save your spot in a game, update functions and finish long downloads. You can start play instantly instead of waiting for these functions to complete after you power up.

Energy use of a PS4 in standby mode

The PS4 in standby mode uses on average 8.5 watts.

Energy use of a PS4 during gameplay

PS4 energy use for gameplay was recorded at 137 watts.

Xbox One wattage follows a pattern similar to other consoles — higher in standby and slightly more efficient during gameplay.

Energy use of an Xbox One in standby mode

The Xbox One in standby mode uses 15.7 watts — the most of all next-generation consoles.

Energy use of an Xbox One during gameplay

During gameplay, the Xbox One is more efficient than the PS4, using 112 watts.

The Nintendo Switch is the most energy-efficient gaming system. It operates on batteries, so it isn’t using energy from a wall socket during gameplay. Energy efficiency also means extended battery life for a better user experience.

Energy use of a Nintendo Switch while charging

Newer Nintendo Switches take between 3 and 3.5 hours to charge, drawing between 7.5 watts and 18 watts.

Energy use of a Nintendo Switch during gameplay

During gameplay on battery power, the Nintendo Switch uses 18 watts of energy.

Energy use of gaming computers

Gaming computers are high-powered PCs and laptops that gamers increasingly prefer. These machines are built for performance, not energy efficiency.

Why do gaming computers drain so much power?

The high performance that gamers crave comes at a cost. High-definition, extra-bright monitors and the souped-up graphics cards that run them are anything but energy-efficient. Gaming PC power consumption is also driven by long hours of use.

Upgrades can reduce gaming PC power consumption. Replacing your old hard drive with a solid-state drive (SSD) cuts the energy used by the drive itself and eliminates the need for a fan. You can also replace an old CRT with an LCD monitor with a good ENERGY STAR® rating.

7 ways to save energy with your game consoles

You don’t have to give up on gaming to save energy. Here are some practical tips for cutting game console energy consumption.

New features like voice control, gesture recognition, wireless controllers and the ability to stream content contribute toward the hidden energy costs of gaming consoles. Gamers might not know that these features can draw power even when they’re not using them.

The ENERGY STAR® website, run by the U.S. Environmental Protection Agency and U.S. Department of Energy, offers detailed instructions for setting up the most popular game consoles to minimize energy consumption without affecting gameplay. Some devices even have an energy-saving power mode.

Console updates can often optimize settings and may include power-saving features, like the ability to automatically shut down your system when inactive.

3. Turn controllers off when not in use

Automatic shutdown functions can save power, but not all gaming consoles have them. Be proactive and turn off your console and its controllers when you’re not using them to cut down on energy waste.

4. Unplug when you can

Like many advanced electronics, gaming consoles can draw power even when turned off, which adds up over time. Unplugging them when not in use cuts game console energy consumption that’s pure waste.

The energy costs of streaming on game console systems can be considerable. Game consoles are not optimized for streaming like a streaming device such as an Apple TV or Roku.

As we explained above, upgrading hardware and components can cut gaming PC power consumption. Berkley Lab conducted a number of experiments for “greening the beast” and offers energy-saving configuration tips.

A professional home energy audit is a thorough inspection of how energy is used — and sometimes wasted — in your home. Including your game console usage in a home energy audit will give you the information you need to find ways to be more efficient and cut overall energy usage.

Gaming has become a leading source of entertainment. And as gaming systems grow more sophisticated, consumer awareness of the energy consumption of game consoles and gaming PCs is also growing. Indeed, manufacturers are feeling the pressure to make their new systems still under development more energy-efficient, especially in standby mode.

With improved awareness, smarter systems and thoughtful habits, energy waste in gaming can be reduced. And by removing the stress of higher energy use, gamers can better enjoy their favorite pastime.

Your analysis is incomplete. Gaming systems also include the power consumption of the video monitor. When Pong was introduced, typical CRT monitors consumed 350 watts. In contrast, today’s larger led monitors consume about 55 watts on average. 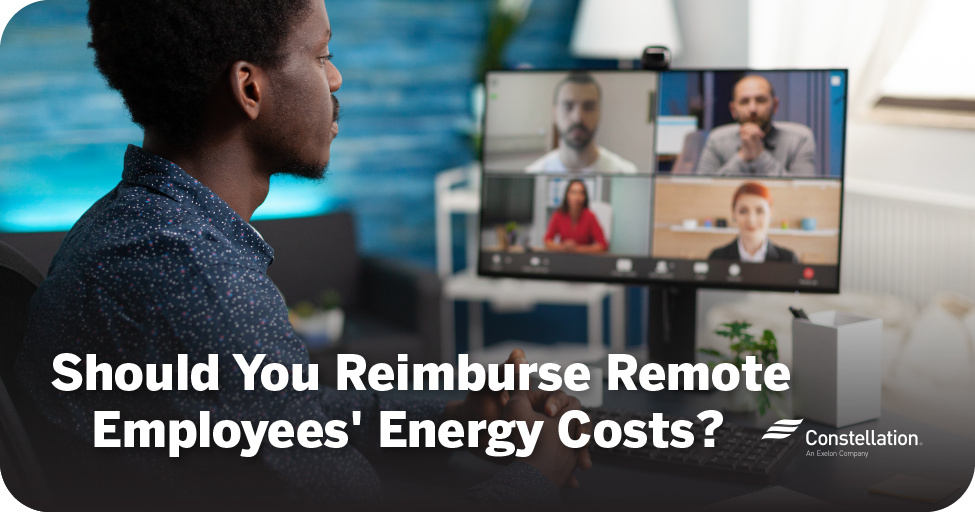 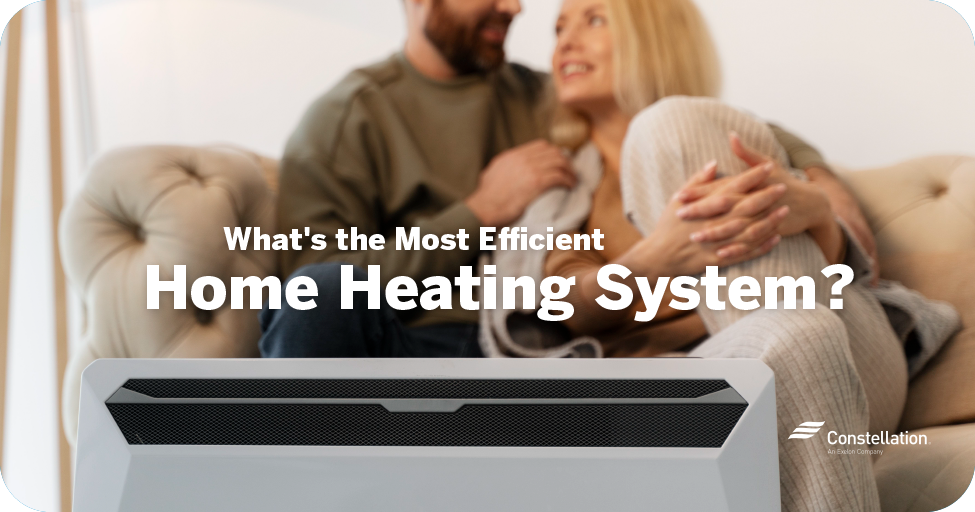